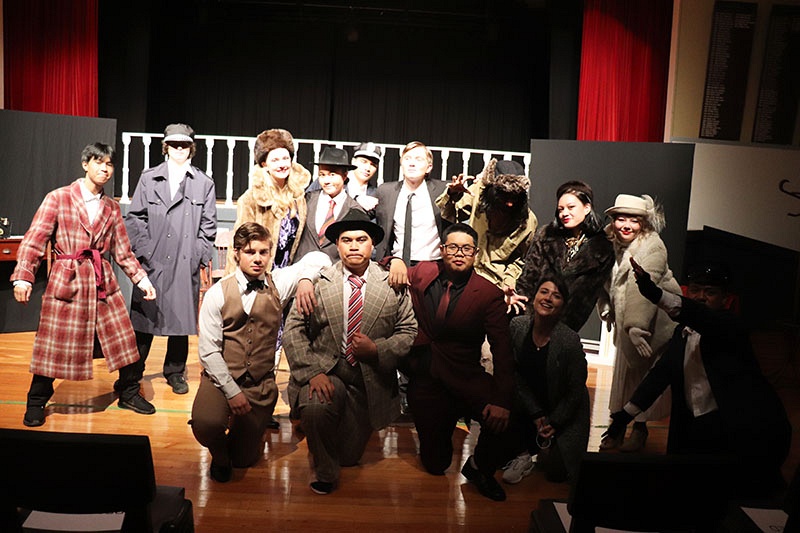 On the 26th, 27th and 28th July, our very talented year 12 and 13 drama students put on a production of Seven Keys to Baldpate.

Novelist Billy Magee makes a bet with a wealthy friend that he can write a 10,000 word story within 24 hours. He retires to a summer mountain resort named Baldpate Inn, in the dead of winter, and locks himself in, believing he has the sole key. However, he is visited during the night by a rapid succession of other people (melodrama stock types), including a corrupt politician, a crooked cop, a hermit, a feisty girl reporter, a gang of criminals, etc., none of whom have any trouble getting into the remote inn—there appear to be seven keys to Baldpate.

The audience tries to decide throughout the play (until the big reveal) whether all of these characters and events are real or perhaps not? A really engaging, funny and colourful production that left the audience wanting more!

The show has a 2 hour run time and the fabulous Stan Foster-Atkins playing the part of Magee was on stage the whole time, and played his character with great conviction. Liam Ashby did a superb job of seamlessly changing between playing Mrs Quimby (an old caretaker woman) to Bland (a criminal) with minimal time for a costume change between! Hēvani Purcell came alive on the stage playing Mrs Rhodes and was very engaging to watch. Sophie Roberts played a very glamorous damsel in distress who was the love interest of Magee. Haleni Dawber played the head chief of police bringing great energy to the stage for the big reveal at the end! Sia Greentree had the challenge of playing a middle-aged man, this is an extremely difficult role to play and she pulled it off convincingly. Luke Huddleson and John Tuitavake made their stage debut as cops and did so well for their first time on stage. Samuel Kroonenberg has taken drama every year and it has been an honour to see him grow into the confident performer that he is now, playing his role as Max. Joshua Monzon played the two contrasting characters of Mr Quimby and the suave owner of Baldpate Inn, switching seamlessly between roles adding his own comedic flair to the characters. Ben Webb also played the character of the owner of Baldpate on a different night, and it was great to see the two different interpretations that Ben and Josh brought to life on stage.  Jacky Siharath was Max’s partner in crime playing the role of Cargan, the corrupt politician. Loveday Tan played the role of the leading femme fatale, dressed all in white, a blackmailer with a mysterious past. Loveday was very engaging in this role and played the melodramatic stock type compellingly. Avi Singh played the part of Peters the Hermit, Avi brought life and comedy to the performance, he was the comic relief in most scenes, and fully committed to his hilarious character on stage.

What a wonderful performance from all of the students that were involved. They really supported each other and always made each other look good on stage.

One comment from an audience member was, “It looks like a professional show, I forgot it was a school production while watching it!”, this just goes to show the time, effort, and passion that these students had put into the final piece. We had the privilege of working with the stage combat professional, Alexander Holloway and the Actor, Zane Fleming who helped with casting and direction.

It has been an absolute honour working with all the cast and crew. I could not be more proud.Thank you to all of those teachers, parents, friends, and students who have supported us by coming to the show and helping with the rehearsal process. It really takes a village to put on a show!