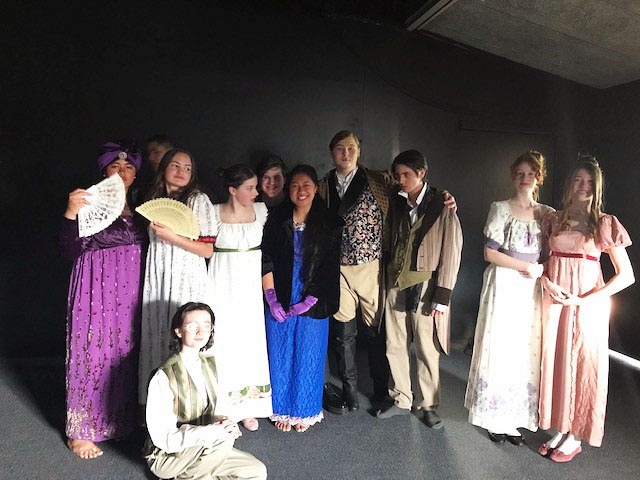 For those of us who are fans of Jane Austen and in particular Pride and Prejudice, the opportunity to see a one act adaptation of this novel of manners first published in 1831 was not to be missed. Perhaps with a little trepidation, not wanting to have the novel diminished in any way, we took to our seats to see the play performed, ‘in the round’ by our Year 10 and 11 drama students.

From the first words uttered we were in the thrall of these young actors. It would be difficult to come up with enough superlatives to describe their efforts; they were simply astounding. Mrs Bennet, was as insufferable as she should be, Mr Bennet scornful of his wife and daughters, with the exception of his two oldest, especially his favourite Elizabeth, as we expected. The chemistry between the arrogant and proud Mr Darcy and the intelligent and lively Miss Elizabeth was evident in the gestures, expressions and voices of the actors. The haughty and pompous Lady Catheerine de Bourgh was beautifully played by Natalie Sifaheone.

Congratulations to all of those people who contributed to making this a truly enjoyable experience and especially to Ms Abbie Parsons, Zane Fleming the Director and the following cast members:

Special thanks to The Dolphin Theatre for their loan of sets and costumes.