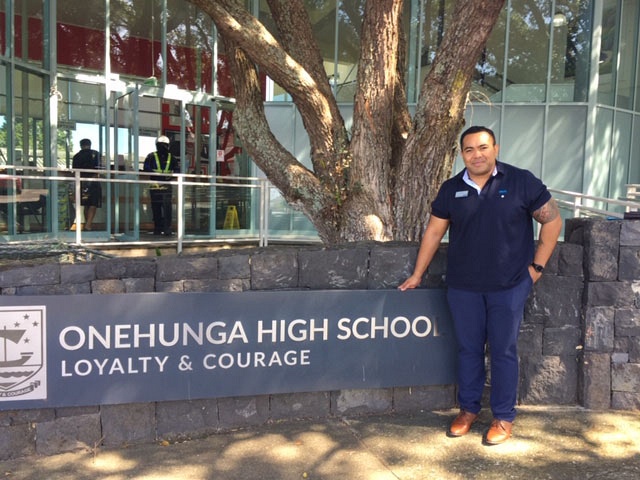 What a pleasure it was to meet former student Danny Vatohi, class of 2006, when he came to school to meet with Principal Deidre Shea today.

Danny who is now the Branch Manager of ANZ Royal Oak has such an inspirational story. He arrived in New Zealand from Tonga to start school in Year 12. He had no English. He was in the Business School and remembers that because he didn’t speak English he was put into Ms Downs Year 11 Accounting class, but was told if he did well he could join his year group in the  Year 13 Accounting class the following year. With help from his teachers, hard mahi and determination he did very well and joined that Year 13 class.

Danny, a keen rugby player, was Captain of the 1st XV. In this role he was expected to speak at assembly every Monday morning. Because he was shy and he felt his English was still poor he made sure to come to school late every Monday, until a team mate figured out the problem and said “come to school and I will do the speech”.

Danny ate a meat pie for lunch every single day for two terms when he first arrived at OHS, not because he loved them, but rather because that was the only thing he knew how to ask for at the tuck shop!

Despite a very difficult start, in a new country, not speaking the language, Danny with help from his teachers, especially Mr Nesbitt, who helped him learn English after school, did extremely well. In Year 13 he was made a Prefect, was Captain of the 1st XV and was awarded a prestigious Alan Haskell Memorial Scholarship. A talented rugby player he was also given a scholarship from Grammar Carlton Rugby Club, who paid for the first two years of his University study, until he was injured and couldn’t play. He did not let this deter him. Danny went on to complete a Bachelor of Business in Finance and Accounting at Auckland University. After working in Australia as a mortgage broker, he returned home to NZ and started to work in various roles at the ANZ. Today he is the ANZ Royal Oak Branch Manager. As Danny said “I didn’t have it easy, if I can do it, others can do it”.

We are delighted to have reconnected with Danny. He is an inspiration, a reminder that if you want something enough and are prepared to have loyalty and courage and work hard, you too can achieve your dreams.