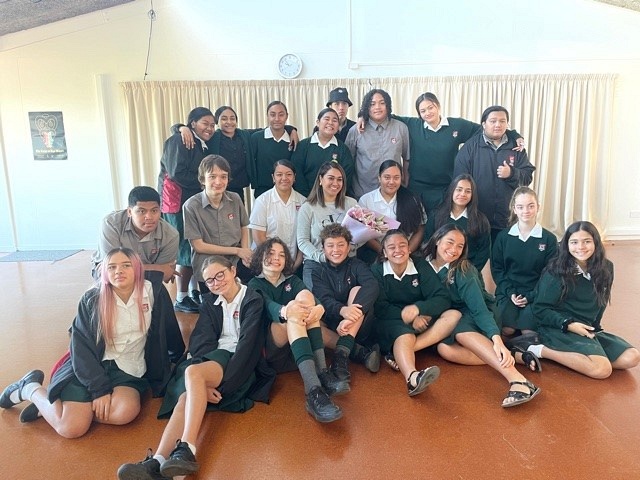 Former student Dr Vanisi Prescott returned to OHS to tell her amazing story of beginning OHS in the Learning Assistance class, to specialising first in Emergency Medicine and then as a GP.

Vanisi hated being in the learning assistance class in Year 9. She felt she didn’t belong there and was determined to ignore the poor behaviour of some of the students in her class and work as hard as she could to get into another class. Vanisi succeeded, at the Year 9 prizegiving she received 13 awards!

How did Vanisi achieve so much? The first thing that she did was to sit in the very front row of every class so that she could concentrate and get help from her teachers. She decided only to be friends in class with students who wanted to work very hard. This meant she had different friends in class than she had outside of school. Some students were not supportive of her, but was strong and remained true to herself and her goals. She had decided to succeed and nothing was going to stand in her way.

‘’ I was a young Tongan, whose mother was a solo parent who worked three jobs to support us. I saw how hard her life was and the sacrifices she was making for us. I was so determined to make her proud and make a better life for us, this was my motivation.’’ There were many nights when Vanisi cried herself to sleep and wanted to give up school, but she managed to pick herself up and push herself on. Vanisi had part time jobs from the age of 14. She had to help her mum and be independent. She worked at Wendys, then at Glassons and Supre, all through school and while at University. Working taught Vanisi how to manage both her time and her money, which has been really important to her in life.

When asked how hard it was to achieve her goal of becoming a Doctor, Vanisi explained that ‘’you just have to be prepared to work extremely hard and to make sacrifices. As a Tongan there were many, many events that I could not attend because you need to put study first if you want to succeed.”

Vanisi suggests that as soon as possible every student learns how to study effectively. Your brain only retains information efficiently for approximately 2 hours at a time, so this is the time that you put away your phone and your music and concentrate really hard. Vanisi finds that drawing diagrams is the way she learns best. She likes to belong to study groups and says the best way to check whether you have understood a topic, is to teach it to someone else.

Dr Prescott was truly inspirational and we would like to thank her for giving up her time to share her journey with us.