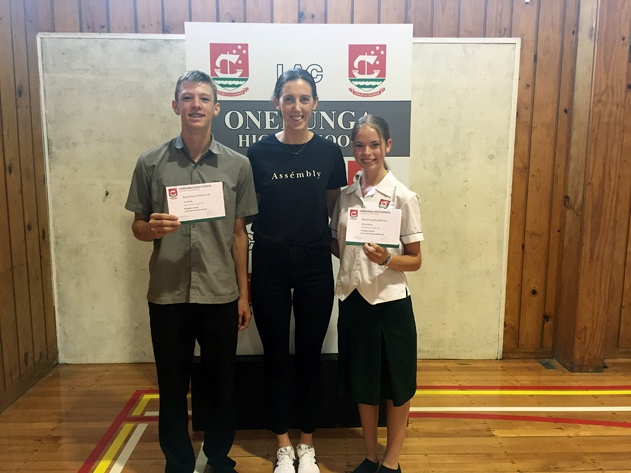 The Junior Sports Awards held today in the gym are an opportunity to celebrate some fantastic individual and team performances.

At OHS we encourage all students to participate in sport. Lessons learnt playing are important in all aspects of life. You learn how to win, how to lose and how to work in a team. The school values, of respect, integrity, trust, loyalty and courage are important in sport and in life.

New Zealand netballer and alumna Bailey Mes was kind enough to return to OHS as the guest speaker. Bailey, a member of the World Champion New Zealand Netball team, said that like all sports people she has had her ‘ups and downs’. When she was dropped from the NZ team, she had to be courageous, work hard, stay motivated and play her way back into the team. Bailey was asked what she thought made NZ netball coach Noeline Taurua, so successful and replied “ Noeline played representative netball herself so understands it. She sets very high standards, and then empowers people to do their job, everyone knows their roles”. Success in sport comes from very hard work, but Bailey encouraged everyone to enjoy their sport, “ take every opportunity and enjoy it”.

Thank you to all the teachers, coaches, managers and families who have given so much of their time to support our sportspeople.

Congratulations to all students who have participated in sports this year and in particular to those of you recognised in the award ceremony.

Alyssa has demonstrated what it takes to be an elite athlete, she is committed, focussed and hard working as she strives toward her goal of being an Olympian. Her achievements this year include:

Ben has had a remarkable year in 2019. He has represented OHS in 9 different sports/events.

In the recent Auckland Volleyball Championships, Ben was selected in the Dream Tournament Team. He has recently been named in the Central Districts U15 Rep Team. He is currently trialing for the NZSS Football team for the 2021 UK Tour.

Congratulations to these inspirational winners!